Because He lives, I can face tomorrow 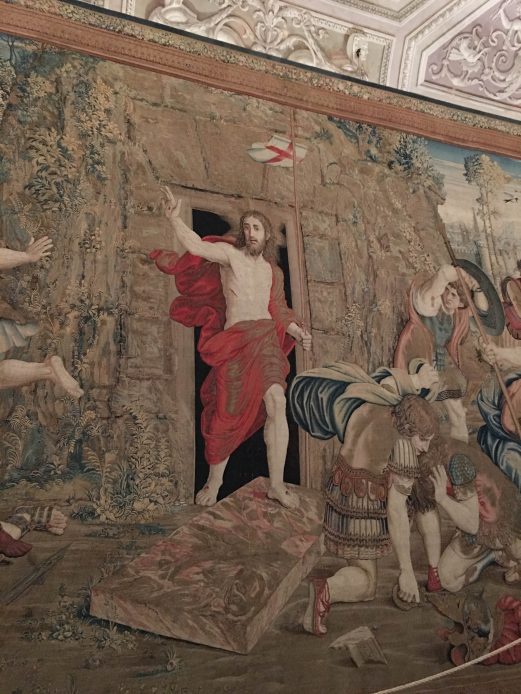 We see the shadow of three crosses on Calvary.

It is still mid afternoon. But the sky has darkened.

The man hanging from the center cross looks up to heaven and cries, “It is finished.”

And darkness descends upon the earth and the ground shakes and rumbles. Rocks are split. The curtain in the temple rips in two, from top to bottom. Heaven opens.

There is hope for mankind.

The people on the mountain are terrified and flee. The disciples run for their lives. They hide and cower in fear, afraid to be discovered as followers of Jesus.

“Now after the Sabbath, as the first day of the week began to dawn, Mary Magdalene and the other Mary came to see the tomb. And behold there was a great earthquake, for an angel of the Lord descended from heaven, and came and rolled back the stone from the door and sat on it. His countenance was like lightning and his clothing as white as snow.”
Matthew 28:1-4

It was not quite daylight but the women who had wept at the foot of the cross of Jesus, ventured out to the site of the tomb, carrying a heavy load of spices to embalm the body of their dead Master. They were stunned at the sight of the angel.

And he said to the women, “Do not be afraid, for I know that you seek Jesus who was crucified. He is not here. For he is risen as He said. Come; see the place where the Lord lay. And go quickly and tell his disciples that He is risen from the dead…….”Matthew 28:5-7

So they went out quickly from the tomb with fear and great joy.

I like to visualize the moment when Jesus came back to life, the very instant of His resurrection. Moviemakers would probably run out of special effects to portray such an incredible phenomenon. It would definitely not be a quiet and sedate scene. How can anyone depict or even envision an event of such magnitude. How does one show the unimaginable power of Jesus conquering death, putting an end to Satan’s boast?

Today is Resurrection Sunday, the day that culminates the observance of Lent.

Easter Sunday is celebrated by Christians the world over. It is the event that defines our faith. If there were no resurrection, we would be stuck believing in something like a myth. It would be the story about a good man, a teacher, or a prophet who performed miracles, who told stories about good and evil, who claimed he was the Son of God, and who was put to death because he was a threat to the religious and political leaders of the times. Nothing more.

Our faith would be like an empty can clanging noisily down the ages without substance or meaning. Our prayers would be forever earthbound, without hope of ever reaching the heart of our forgiving Lord.

But He rose again. Jesus is alive. And because He lives, you and I can face tomorrow.

Today we celebrate the great exchange; how Jesus willingly and lovingly suffered the cross to pay for our sins, how he took upon himself our ugly sinfulness. He laid on himself our corruption, took the blame for our wicked ways and gave us his righteousness. In other words, we were justified and made righteous and Jesus, who had no sin, became sin for our sake.

Jesus paid a debt He did not owe. It was our debt, yours and mine

Jesus went to the cross in our place. Jesus paid a debt He did not owe. It was our debt, yours and mine. The thought of it is soul wrenching.

Jesus died so that we may live.

But on the third day, God raised him; “freeing him from the agony of death, because it was impossible for death to keep its hold on him” Acts 2:23-24.

We all know and have read over and over again, the story of the death and resurrection of Jesus Christ. We are still amazed by the stunning events that happened more than two thousand years ago. Many Christians make time to follow the events that took place on the Via Dolorosa, when Jesus carried his cross up to Calvary.

Can you imagine yourself somewhere in the crowd? Were you just watching? Were you cheering? Were you with those who shouted to condemn him? Were you moved at all by the sight of the bleeding Savior?

Unfortunately, for some of us these events now seem to be just oft-repeated stories that have become like folk legends, their significance lost in the hustle of today’s realities and no longer relevant to people addled by the “more important” events of today. After all, what does the death of a Jewish carpenter have to do with the spread of Covid19, or the rising cost of fuel, or the heartbreaking war in Ukraine, or the latest polls, or the lust for power and arrogance of politicians? Right?

The answer is, EVERYTHING.

Only Jesus can reverse our circumstances here on earth, deeply mired as we are in sin and disasters of our own making. We desperately need the resurrection power of Christ to rouse us from this stupor of death and decay that surrounds us. Why do we choose to remain in the gutter and wallow? We must get away from the fetid stench of sin. We need to be cleansed by the blood of that one perfect lamb, the only one without blemish.

But here we are, deep in the rot of our sin, obstinately refusing to accept our frailties. We have become too smart for our own good, too busy to care about anyone but ourselves. We indulge in vicious gossip, all manner of sinful pleasures, and in blatantly corrupt transactions. We have become shameless; jaded by the times we live in. And we refuse to accept the need for change, or repentance or prayer.

Nothing stirs us anymore, unless it is on social media

Nothing stirs us anymore, unless it is on social media. When was the last time you opted not to repeat or forward an online comment because it was unkind, or untrue, or both?

Today our values are foolishly anchored and dependent on public opinion; and our principles have been warped by alliances we have forged with the elements of darkness, all for the expediency of self-promotion, power or profit.

We have lulled ourselves into believing that we are “okay” because once in a while, when we’re in trouble or in some desperate need, we do pray.

“But loving our neighbors is really difficult, Lord. And loving our enemies is even harder.” Have we tried?

People surround us in need. Do we reach out to them from the heart and not just for show? Do we follow the Good Book in our every day lives, even when it affects our reputation or our finances? What are we teaching our children? What do they see us do, hear us say?

When it comes to telling the truth, do we weigh our choice on the scales of what is right or on what is convenient? When was the last time we made a decision according to the dictates of our conscience?

And speaking of decisions, on May 9 it is Election Day.

In less than a month we have the privilege and sacred duty to make a momentous decision for our country. On what or on whose moral compass will we base our choice?

I personally consider that these elections, despite the hype and the hoopla, will be a contest between good and evil. I seriously and strongly urge that each one of us dig deep into our hearts and pray; and seek the light and the wisdom of the Lord, and vote according to His counsel.

Because, as insignificant as one vote may seem to you in the huge picture of a national election, that one vote has the power to make or break the lives of millions of Filipinos and it can totally change the moral landscape of our country forever.

She was once a journalist with Manila Chronicle, a book author. She is a mother, a grandmother, a great grandmother whose wisdom and graceful writing style many readers continue to enjoy.