‘I’ll see you….’— Ji Chang Wook chills with fans the world over

We’ve all learned to celebrate what makes us happy 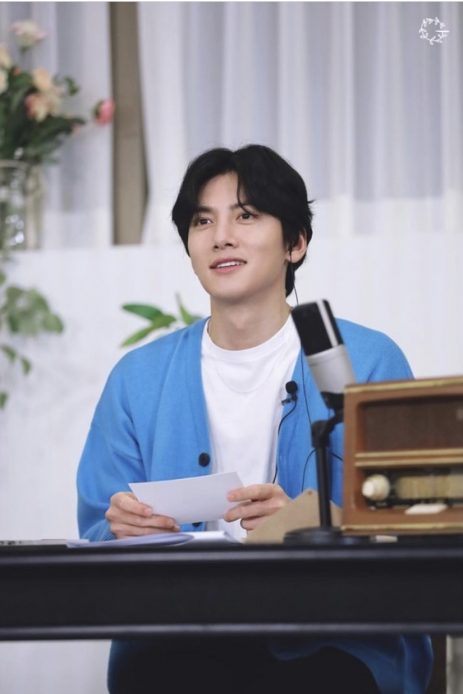 My last trip to South Korea in 2020 before the pandemic was for Ji Chang Wook.

The South Korean actor’s fan meet set for that Valentine weekend had already been postponed but I went ahead with my trip, not wanting to waste the money I spent for my plane ticket and hotel booking. Besides, I was also meeting my Seoul-based friends, Kaethy and Ilona, who are also Wookie fans, and Korea is my happy place, so it was still time well spent.

Little did I know that a few days after that weekend, it would be discovered that Daegu had become the first city outside of China to have the largest coronavirus outbreak.

Going to South Korea to see celebrities in events like concerts and fan meets had become a regular thing for international fans, including myself, thanks in large part to the democratization of air travel.

Ji Chang Wook’s February Waiting for You fan meet would have been my second time to see him live onstage after his Late Spring, Early Night fan meet in May 2019, just two weeks after his military discharge—for which I also went to Korea with friends.

Waiting for You was also set to be held in different Asian cities, including Manila, but all these schedules were scrapped because of the pandemic.

I was an hour late for the fan meet because I failed to wake from my nap (I was exhausted from my back-to-back Zoom meetings that Saturday). I was happy to see Ji Chang Wook again, and I mentally kicked myself for missing the first part of his fan meet.

I know I have failed miserably as a JCW fan after I fell into the Bangtan Sonyeondan rabbit hole. I haven’t completed watching his last three dramas. I’ve just been spending so much time watching BTS’ endless content.

Ji Chang Wook is, after all, my first favorite Korean celebrity after I discovered Korean dramas in 2018 (I’m a late bloomer, I know.). Healer, K-2, and Fabricated City were my absolute favorites. I even dragged my friend, Trina, to freezing Busan in December 2018 to watch Ji Chang Wook in a military musical.

Imagine my excitement when my sister sent me a clip of the first song that Wook played at his fan meet: BTS’ Spring Day! The queen of Bangtan’s songs is our anthem after a year of social distancing, wearing face masks, and staying at home. Spring Day just captures our deepest emotions in our upturned world. Wook opened his fan meet by telling everyone how much he missed them with this BTS song:

Though I’m looking at your picture,

I still miss you…

I had to ask friends who I met at the Late Spring, Early Night fan meet what happened in the first hour that I missed, since the video is still unavailable for replay.

Elyse sent me the setlist and Wook played eight songs in total. The concept was DJ Wook where the actor played songs that meant a lot to him and his fans. It was designed to be a chill night with fans. At its peak, the show had close to 9,000 viewers, according to a tweet from @JCWKitchen.

Watching the second half of Last Winter, First Wish felt like reconnecting with Ji Chang Wook. I realized I missed hearing his baritone (“JCW has one of the best voices among Korean actors,” my editor and fellow Wookie fan, ma’am Thelma, texted while also watching the fan meet).

And I missed his laugh that just sounds like pure joy. 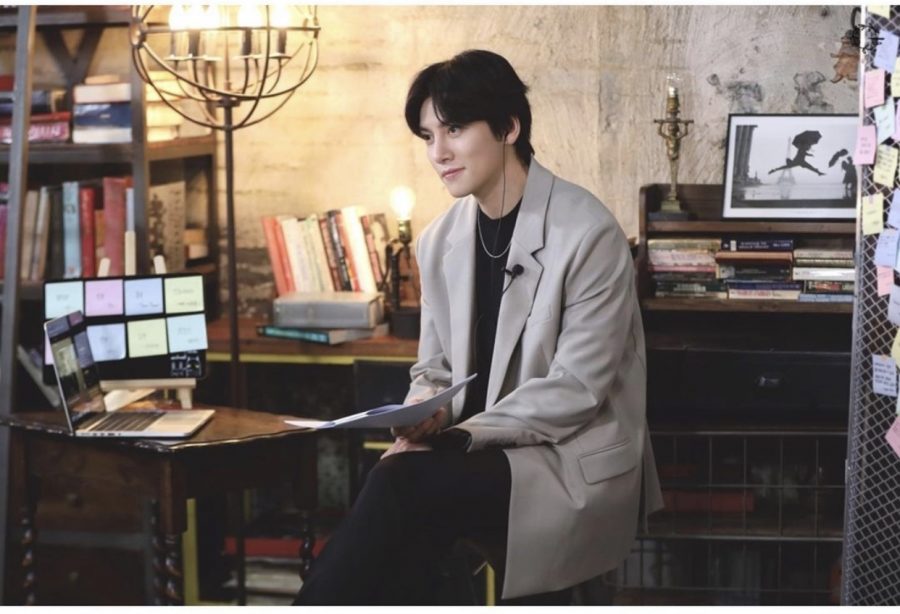 As DJ, Ji Chang Wook played, among other songs, the BTS’ ‘Spring Day’ and his favorite Lee Juck’s ‘Things We Took for Granted’. (Photo from official Instagram account of Glorious Entertainment)

Ji Chang Wook answered questions sent from all over the world. He granted one fan’s request for him to sing Let Me Love You by Yurisangja, which was a song from his latest drama, Lovestruck in the City.

He talked about the places he had been to for vacations like New York City where he “walked a lot, ate food, and took photos of clocks and buildings.” His trip to Bangkok, Thailand (photos of which he actually shared on his Instagram in 2019), he said, was his most memorable vacation because of its funny backstory.

He and his friends were supposed to go to Hawaii. They had everything planned out except that when they got to the airport, they were asked if they had visas. Only then did they realize they forgot to apply for one. To cut a long story short, they ended up in Bangkok.

Wookie talked about places to visit in Korea, including Yangyang, a county in Gangwon province, two hours away from Seoul, that known for its beaches, especially one that is dedicated to surfing.

Yangyang was where Park Jae Won, his character in Lovestruck in the City, went supposedly to relax and surf for a month but ended up finding the love of his life. (Wook said a lot of the beach scenes were actually filmed in Jeju Island.)

Wookie also played the popular “Balance Game” with fans where he had to choose between two difficult and often funny options, ie, re-enlisting in the army vs I’ve been single for life; never brush your teeth vs never taking a shower; changing your personality vs changing your appearance; being city poor or country rich; being photographed or taking a photo; rock vs ballad.

“He chose not brushing his teeth because he could still gargle. I also remember that he clearly said he does not like mint chocolate. He’d rather eat toothpaste,” my friend, Michelle, told me.

Thanks to the real-time English translation provided at the fan meet, non-Korean speaking fans like us were able to understand the whole show. The translator did a heroic task as we saw him/her making sure that everything was translated properly, down to the spelling, even erasing then re-typing some words.

As DJ, Wookie played choice songs, among them Dreams, Books, Power, and Walls, about the challenges of adulting by the South Korean indie rock band, Jannabi, and IU’s Through the Night.

Ji Chang Wook aptly wrapped up the show with Things We Took for Granted by Lee Juck, his favorite singer, who released this ballad in 2020. It is another anthem for all of us trying to survive the pandemic:

Ji Chang Wook read a letter he wrote to fans where he echoed Lee Juck’s song. But most especially, he expressed his gratitude to them for always being with him and cheering him on. He believed that one day, we can all meet face-to-face again: “I’ll see you when that time comes. Please stay healthy until then.”

As he bid everyone good night, Ji Chang Wook said he had no idea how to carry out an online fan meeting, but thanks to everyone, it became possible.

Indeed, Ji Chang Wook’s fans in Korea and the rest of the world took the extra mile to make the event a special one. They designed and printed out tickets as their own souvenir from the fan meet and shared the excitement online.

A year into living in this strange world, we’ve all learned, among other things, to celebrate what makes us happy. 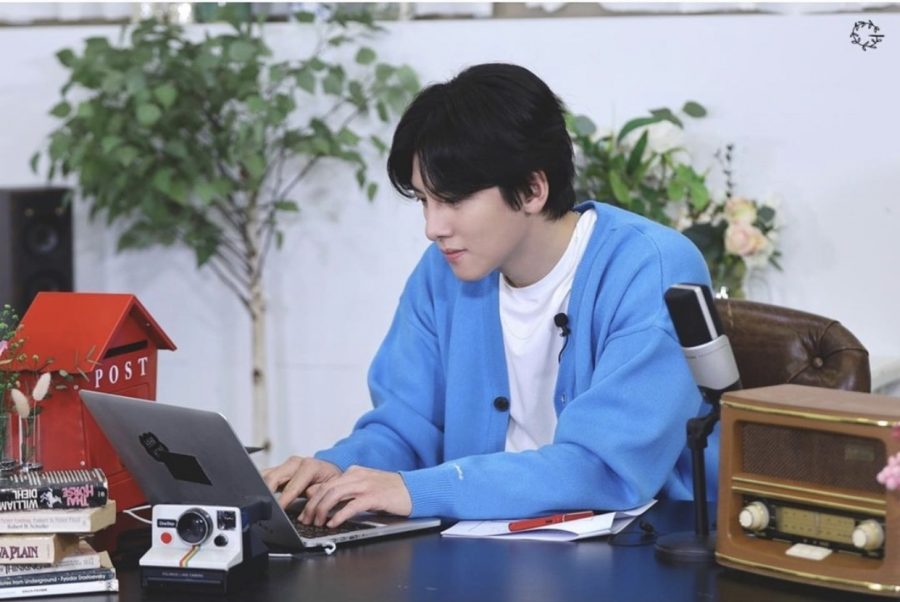