My journey of defiance, defeat, and some hope

I was too young to remember Martial Law. We grew up no longer having to fight for our basic rights 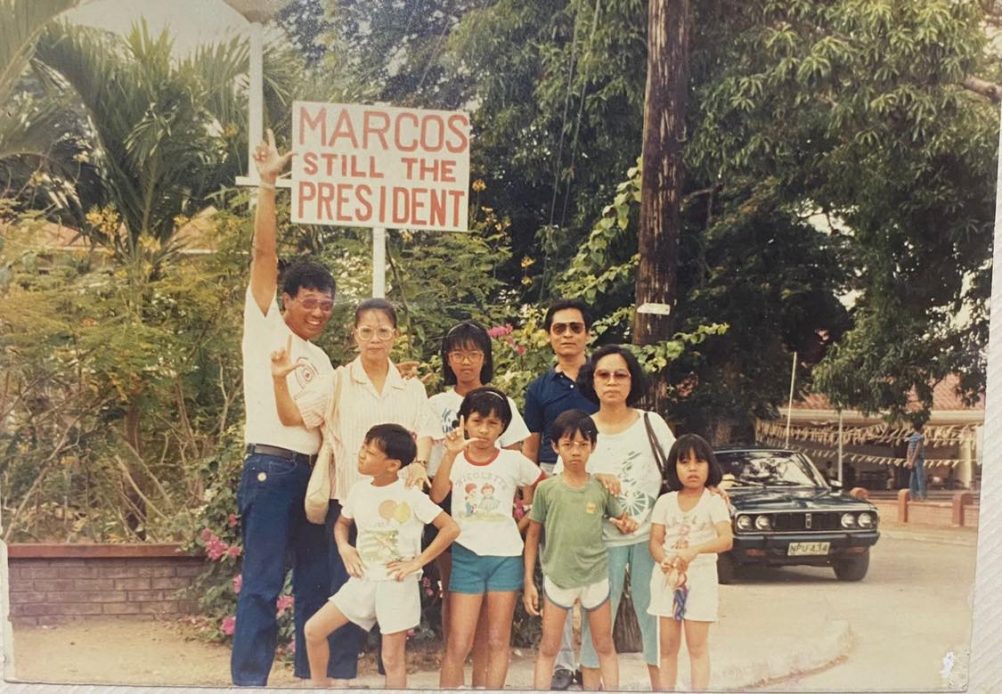 Shortly after the 1986 People Power Revolution, the author (in green shorts) and her family, on a trip to Ilocos Norte, flashing the Laban sign before the sign of the times

These were the first big English words I learned as a child even before I turned 10 years old in 1986. And to a great degree, they shaped my political beliefs growing up.

I was seven when opposition leader Sen. Benigno Aquino, Jr. was assassinated on August 21, 1983.

A year later, my grandfather, Amado Dizon, spent one night in our house for his safety, we were told. I didn’t understand why his life was in danger, but my inquisitive older sister had apparently seen my parents hide what looked like a “book” inside a cabinet in our living room.

Taking it out when she got the chance, she called me and together, we leafed through it. Our mother saw us, scolded us, and told us to never, never touch it. It was my grandfather’s copy of the majority report of the Agrava Fact-Finding Board, which they were set to release a few days later. That Marcos and his men were frightening hit close to home.

My parents, who were in their 40s then, were not activists but were defiant of the dictatorship in their own way.

I remember the nights they bundled my siblings and me in our little two-door Mitsubishi Galant to join noise barrages called on by the opposition. My dad honked the horn, along with the other vehicles on the streets, in solidarity with the protests taking place. The energy was always high, hopeful, rebellious. My mom told us to flash the “Laban” sign at everyone we saw as they flashed the L-sign back at us.

When Ninoy’s widow, Cory Aquino, won the 1986 snap presidential elections, my friends and I chanted “Marcos concede!” at the top of our lungs to badger our pro-Marcos neighbors while we played our afternoon street games. My dad had a list of the companies that we were all supposed to boycott because their owners were Marcos’ cronies.

In February 1986, we watched the popular TV news anchors of that time unable to hold back tears as they announced that the Marcoses had fled the country. My parents hurriedly put my sister, brother, and me in yellow shirts with Ninoy’s face printed on them and brought us to Edsa so that we could join the final day of the People Power Revolution.

Born in 1976, I was too young to have a vivid recollection of what life was like under a dictator’s rule. Most of what I knew, I learned from home and at St. Theresa’s College, QC, a school where we watched Sister Stella L. Lualhati Bautista was the students’ favorite writer, and everyone owned an Inang Laya cassette tape.

We didn’t experience the brutalities of Martial Law and the excessive lifestyle of the Marcoses and their cronies while Filipinos wasted away.

What my generation saw was the end of the dictatorship and the beginning of the restoration of democracy.

We grew up without the fear of repression and the insecurities that our parents and our grandparents had to live with under a strongman’s rule. We grew up no longer having to fight for our basic rights and freedoms. They’ve been handed to us after Edsa People Power Revolution. We grew up able to breathe freely.

By the late ‘90s, we were finally able to vote, and we understood the weight of a peaceful transition to power —even if most of those who ran for office were less than ideal and in many parts of the country, vote buying, and intimidation were still the norm.

But any Chief Executive who hinted at wanting to become President for life was met by a pushback from the people. Never again.

Sure, life wasn’t perfect. There was so much mess left by the Marcoses to clean up, and there were subsequent disorders that made the country suffer so many starts and stops. There were frustrations over how Filipinos squandered the opportunity to rebuild the country. We didn’t become a wealthy nation like South Korea, a country with a similar journey to democracy as ours. Sayang. But whose fault was it?

Partly, I would say, the generation before us who fought the Marcoses but ended up fighting among themselves, and my own generation, too, because what did we do when we became old enough to preserve the gains of democracy and help build our nation?

As a journalist, I’ve heard many of my seniors share their Martial Law “war” stories—censorship, shutdowns, dossiers, detentions. They tell it as if these happened only yesterday.

Listening to them as a post-Edsa Revolution reporter, I considered my experiences on the field comparably dull because we were, well, free.

I tried to my best to be true to my duty as a journalist and perform the media’s role in a democracy, so much so that I feel utterly ashamed to admit it today, but there was a time that I thought journalists must move on from the haunting shadows of Martial Law, and not be in that time warp.

I don’t recall exactly what made me take for granted the freedoms gained from the Edsa Revolution, but I probably felt that after Gloria Arroyo’s turbulent years, Benigno Aquino III offered some stability in the country. And—he wouldn’t dare jail journalists, even if he had a testy relationship with the press. Ironically, Aquino himself, the only son of the country’s democracy icons, had often recounted the hardships brought by Martial Law and reminded us that we must always protect our freedoms so that history would not repeat itself.

Rodrigo Duterte brought back the dark days of the dictatorship without declaring Martial Law, and I became a victim of my own foolish presumptions and complacency. I couldn’t stand his administration so that I eventually decided to go on hiatus from journalism.

I think I am not built to fight a strongman or to withstand the folly of my generation, we who became the direct beneficiaries of the restoration of democracy.

A large percentage of our cohort voted for the late strongman’s son and namesake to be the country’s next president. It’s still unbelievable that the family I saw driven away by the people’s collective rage is now back in all their resplendent glory.

Today, I am older than when my parents were in 1986. If I had children, they would probably be the same age as I was when I first learned the words assassination, concede, and revolution.

History, I pray, would not repeat itself. I see a glimmer of hope not from my generation anymore, but from the young Filipinos who refuse to be brainwashed and fooled by the disinformation and revisionism. I know grade school students who understand and appreciate history, the real story, not the twisted facts.

My fervent wish is that they will bring light to this country, even if I don’t get to see that anymore.