Winners and losers in PH 2020 economy—explained in 5 charts

Will household spending continue to improve
even after the holiday spending spree? 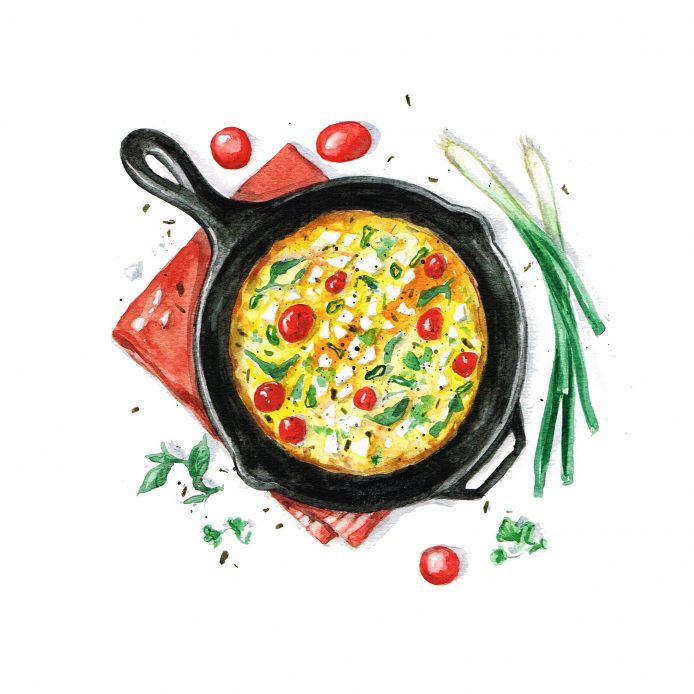 Spending on food and home furnishings drove much of the recovery.

You must have already seen the news that Philippine Gross Domestic Product or GDP declined by 9.5% in 2020. This is the worst economic performance since 1947 since the country started tracking GDP data. What exactly does that mean?

GDP is essentially a measurement tool that is used to track the level of economic activity in a country. Simply put, it is the sum of all transactions at a given time. There are two ways to measure it: (1) the expenditure approach, which sums up all the spending of different sectors in the economy, and (2) the income approach, which adds up all the income of different actors in the economy. 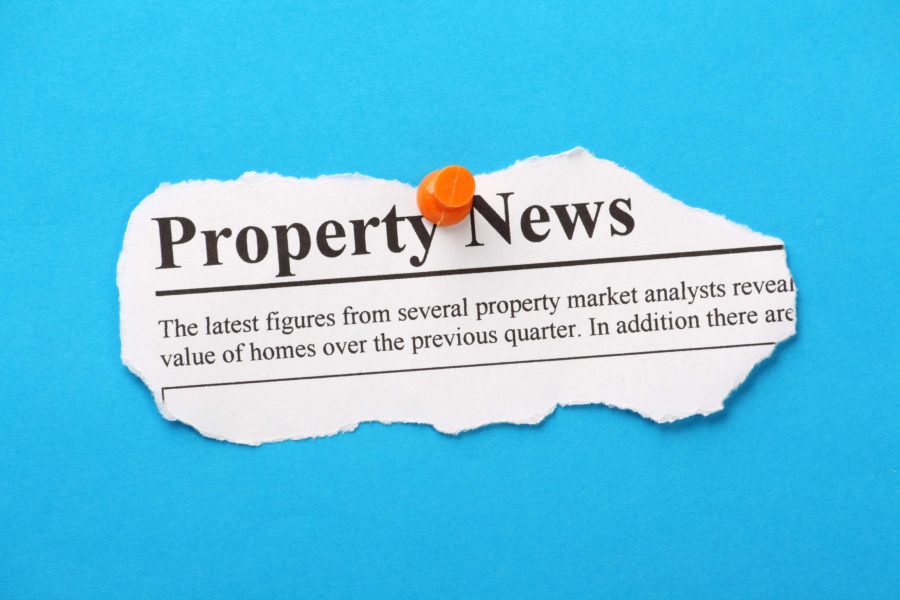 Winner: Well, relative to all the others, you can say that Household Consumption is recovering faster, only down 7% in the 4th Quarter compared to previous period last year. People’s total spending in the 4th Quarter picked up to hit Php3.6 trillion from its lowest point in the 2nd Quarter when the whole country was almost in complete lockdown and household consumption spending went down 15% year-on-year. We should thank the Filipinos’ strong Christmas spirit for that. 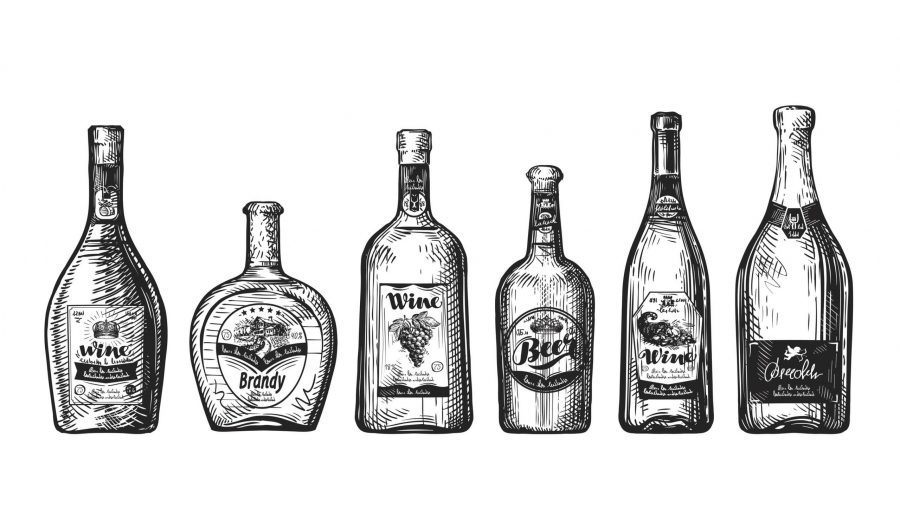 Even the holiday spirit couldn’t pull up spending on alcoholic beverages and tobacco.

Winner: Household Consumption did recover faster by the 4th Quarter but this was not felt across all categories. Spending on Food and Non-Alcoholic Beverages in the 4th Quarter drove much of the recovery at Php1.4 trillion, higher than previous years—proving that not even a pandemic could stop the holiday festivities. Housing and utilities, as well as Household Furnishings, reached Php430 billion and Php107 billion, respectively, in the 4th Quarter, beating its pre-pandemic quarterly average—a testament perhaps to the fact that everyone is mostly just staying at home. Spending in Health and Communication are also much higher than in the past reaching Php137 billion and Php113 billion, respectively in the 4th Quarter, not surprising given the pandemic and that most of our lives are now spent online (work, education, commerce, entertainment, reunions). Clothing and footwear recovered in the 4th Quarter at Php70 billion, just in time for gift giving, after crashing to Php36 billion and Php52 billion in the previous two quarters— its worst performance in a decade. 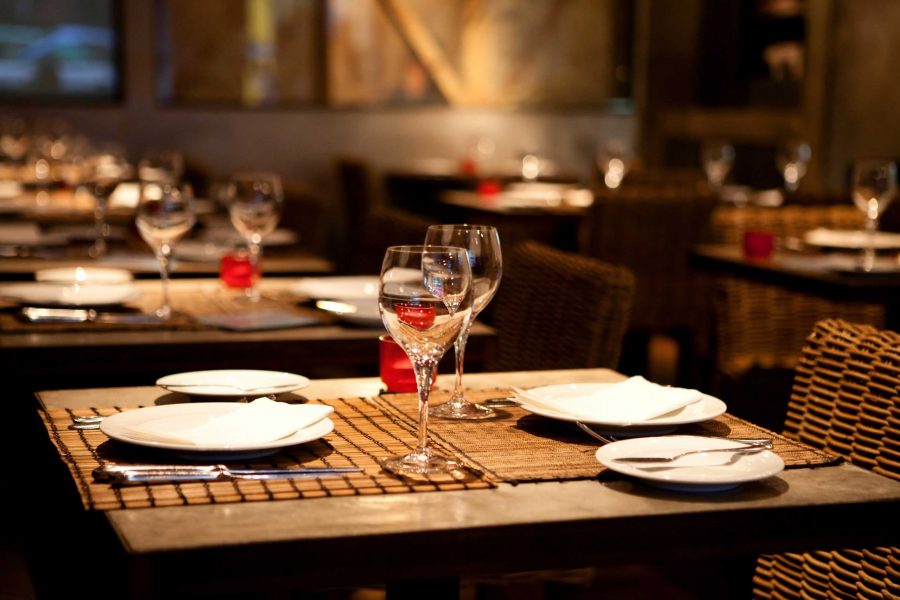 Food Services and Arts, Entertainment and Recreation were down 43% and 55% from 4th Quarter last year. Combined, these sectors employ around 8 million or 20% of the labor force. 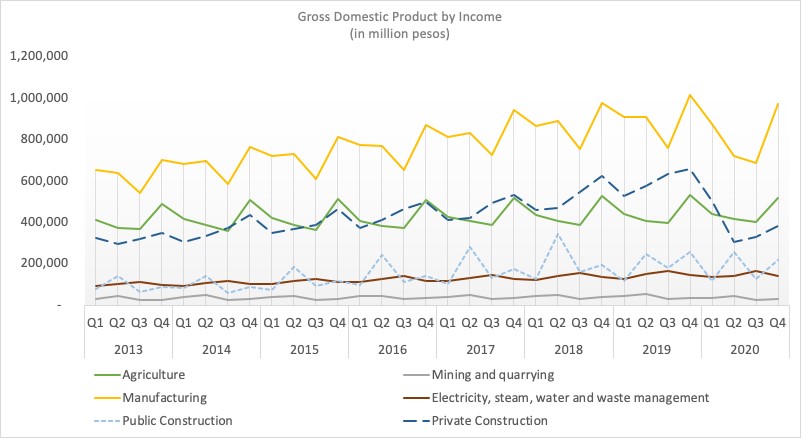 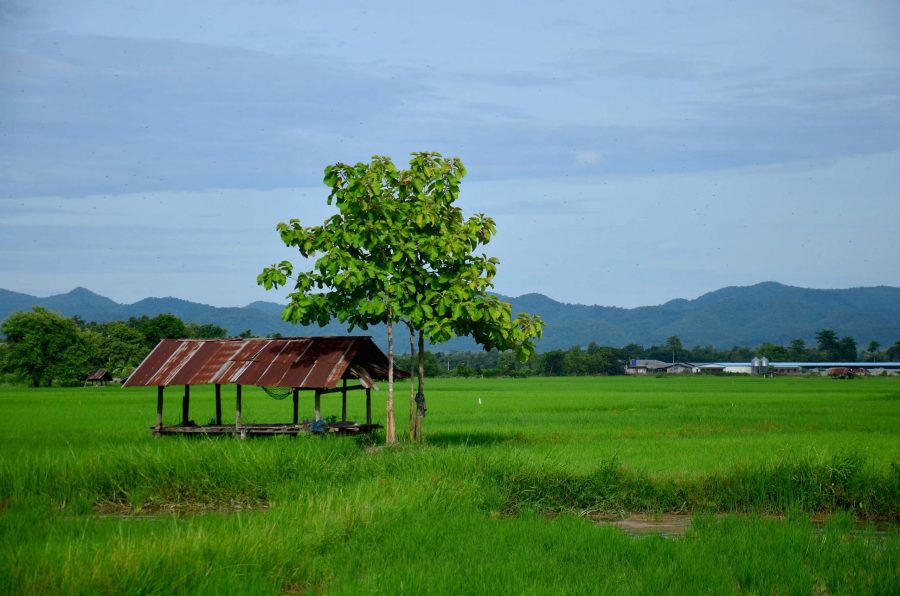 Agriculture, mining were able to recover in 4th Quarter. 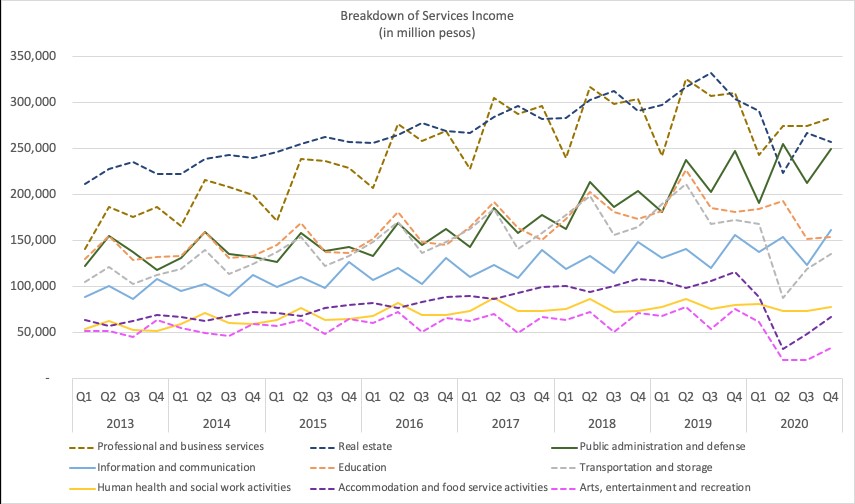 Winner: The uptick in Services mostly came from Wholesale and Retail Trade, and Financial and Insurance Activities. Employing 8.3 million Filipinos, Wholesale and Retail Trade, although still down 4% from 4th quarter last year, came back strong in the 4th Quarter at Php945 million after hitting historic lows in the preview two quarters, likely propelled by the increase in consumption due to the Christmas season. On the other hand, Financial and Insurance Activities barely took a hit during the pandemic and was up 4% from 4th quarter last year but its resilience is felt only by a few since employment in the sector is only at around 600,000. Public Administration and Defense, Information and Communication and Human Health and Social Activities also contributed to the 4th Quarter resurgence of Services.

Loser: Real Estate led the losses in Services at only Php257 billion in the 4th Quarter, still down 15% year-on-year. Professional and Business Services at Php283 billion, Education at Php153 billion, and Transportation and Storage at Php135 billion followed with 4th Quarter year-on-year losses of 9%, 15% and 21%, respectively. Significant losses were incurred by Accommodation and Food Services and Arts, Entertainment and Recreation, which were down 43% and 55% from 4th Quarter last year. Combined, these sectors, employ around 8 million or 20% of the labor force. 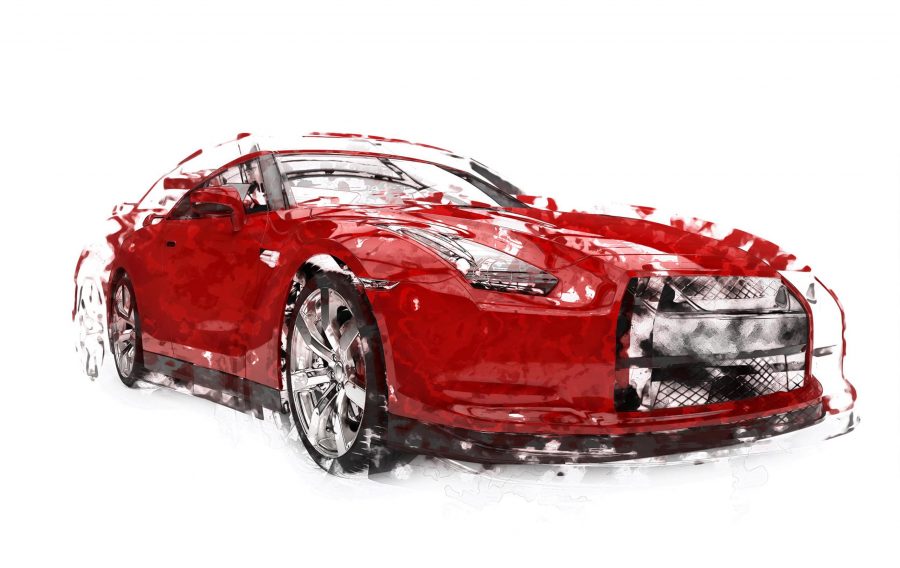 Loser: Computer and Electronics, Transport, Machinery and Electrical Equipment, and Textiles, Apparel and Footwear were all below their pre-pandemic performance. 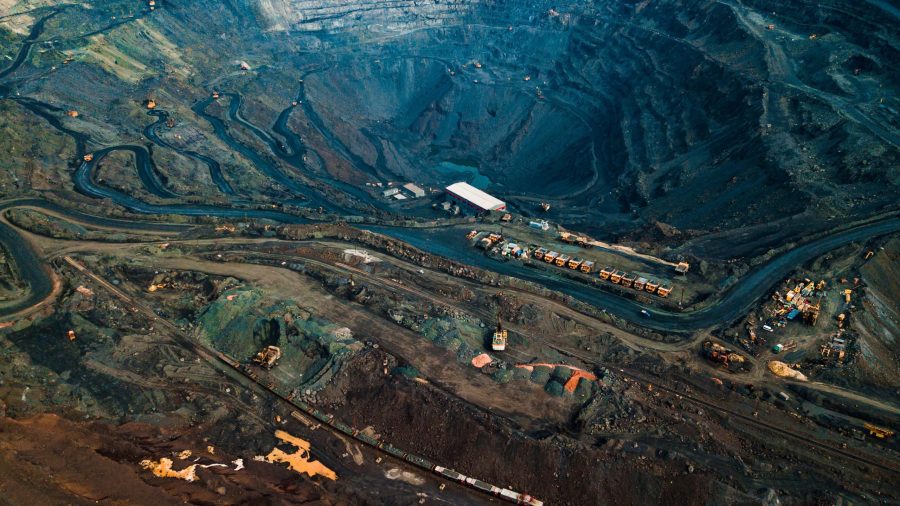 Agriculture, mining were able to recover in 4th Quarter.

Will there be a strong recovery in 2021? That would entail the winners in 2020 maintaining or accelerating their momentum, and the losers reversing their declines. 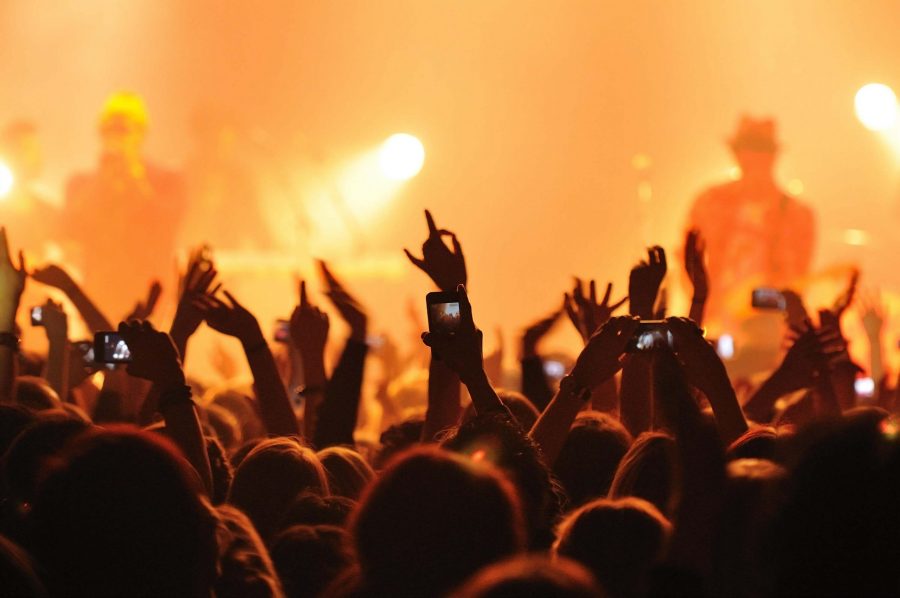 Food Services and Arts, Entertainment and Recreation were down 43% and 55% from 4th Quarter last year. Combined, these sectors employ around 8 million or 20% of the labor force.

Look for early signs for the following: 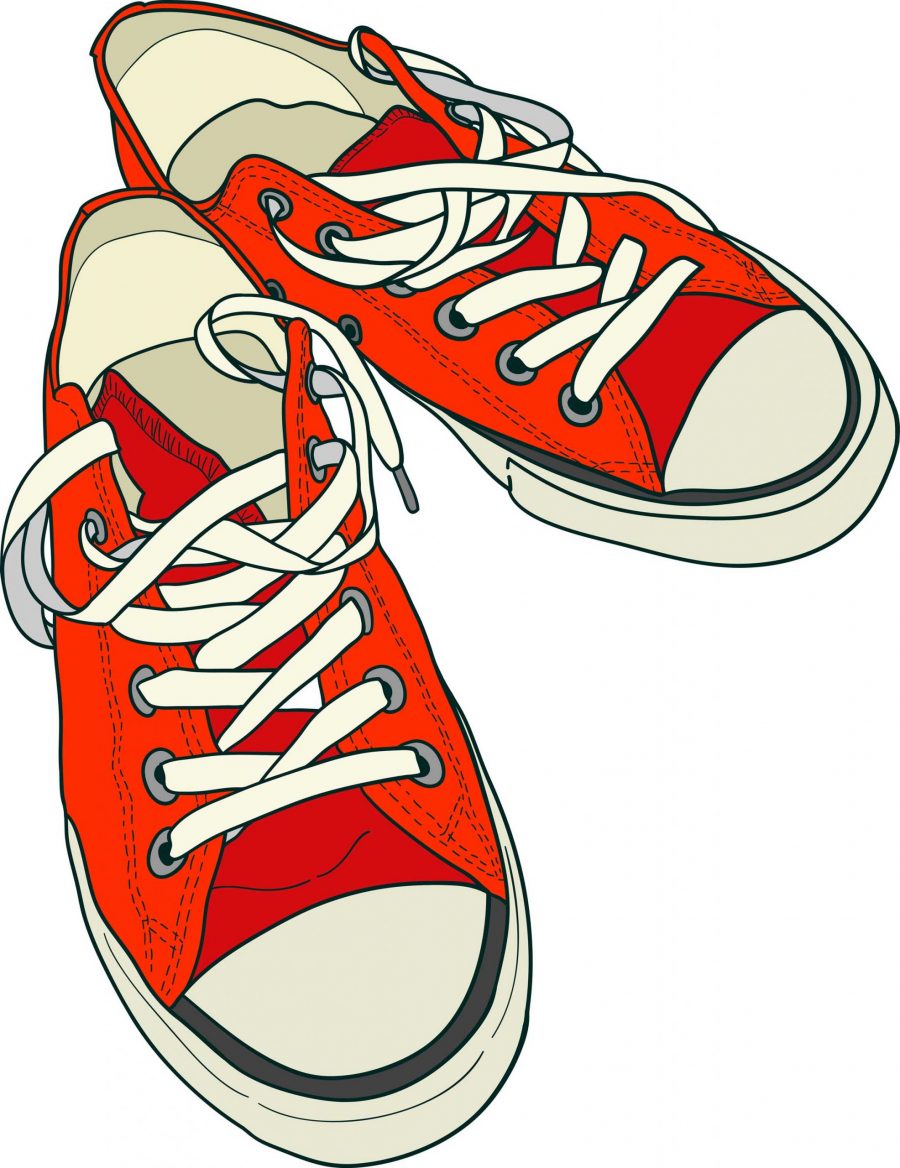 Clothing and footwear recovered in 4th Quarter at Php70 billion, just in time for gift giving, after crashing to Php36 billion and Php52 billion in previous two quarters— its worst performance in a decade.

He is a teacher and social entrepreneur, a former civil servant and corporate manager, working to get more citizens engaged in politics, economics and policymaking.