‘Hello, Philippines, we are BTS!’:
What we Armys now feel 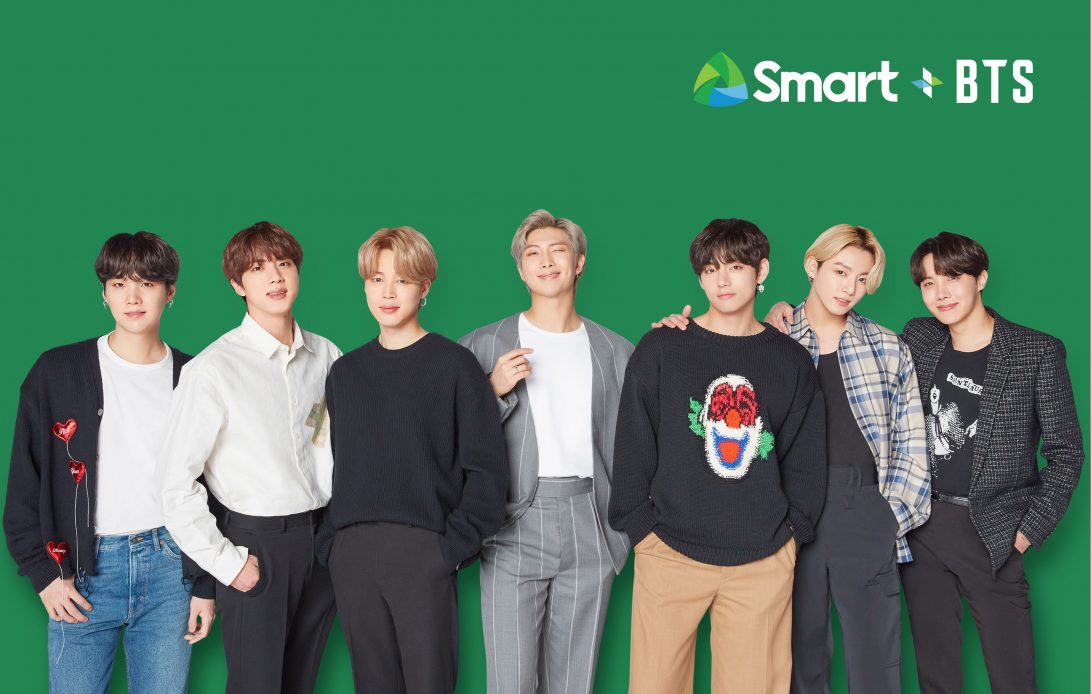 I’m guessing so many Filipino ARMYs—as the fandom of South Korean mega band BTS are known—were unable to sleep Monday night. Our adrenaline was at an all-time high after Smart Communications announced that the Grammy-nominated, chart-topping Bangtan Sonyeondan (BTS) are the face of its “Live Smarter, Live with Purpose” campaign.

Soon after the 35-second BTSxSmart teaser dropped, I alternately read ARMYs excited posts on Facebook and Twitter. “Filo ARMYs win!” everyone cheered and a thousand memes celebrating the victory were born. We cannot believe we heard RM, Jin, Suga, j-hope, Jimin, V, and Jungkook say, “Hello, Philippines, we are BTS!”

The BTSxSmart collaboration is the closest Filo (short for Filipino) ARMYs could get to having Bangtan in the Philippines, albeit online. It’s been a while since the boys had been to the country. We had hoped that Manila would be part of the band’s Map of the Soul (MOTS) world tour in 2020. Except for their native South Korea and Japan, BTS had yet to announce the rest of the tour’s Asian leg when the pandemic struck and brought our lives to a screeching halt.

Last year, I wrote for Rappler that BTS were reportedly Smart’s next endorsers. I mentioned that according to my source/s, it was supposed to be a Christmas campaign.

Well, the timeline was wrong, but that the BTSxSmart partnership was launched at the start of the new year was actually perfect. The campaign is inspiring and hopeful, which BTS are to their millions of fans.

In the clip, RM, the band’s leader, said that BTS were supporting “Smart’s goal of inspiring people to live their lives with passion and purpose no matter the challenges that lie ahead.”

Smart’s campaign amplifies BTS’ constant message to their fans to love yourself and speak yourself, to bring comfort and happiness to others, and that when the going gets tough, life goes on.

As an ARMY, I appreciate that.

It’s always been said that BTS come into your life when you need it the most. Some might think it’s an overly dramatic statement, but ask the fans, and they would have their personal stories to share.

The songs of RM, Jin, Suga, j-hope, Jimin, V, and JK always speak to you, their razor-sharp choreography leave you in awe, they have an authenticity and humor that you don’t always find in celebrities. They genuinely love and appreciate their fans. They banter with ARMYs on Weverse, a social media platform created by Big Hit Entertainment, their agency. They are hardworking, humble and they keep their feet on the ground. They are proud of their country and they celebrate their heritage.

For sure, Filo ARMYs have watched that very short teaser over and over again, giddy with excitement each time. That really is the BTS-effect. They have this gift of making you smile, or even laugh, and most of all, touch your heart. The world is just brighter with BTS.

RM, Jin, Suga, j-hope, Jimin, V, and JK have often said the pandemic shook them to the core. They felt angry and frustrated; they felt sad and lost just like us. Then they rallied themselves, taking ARMY along on the journey to forge ahead and continue making the most of the world’s situation.

They released their first full English song, Dynamite, and hearing a bright melody with lyrics that go “shining through the city with a little funk and soul” complete with a ’70s disco look lifted our weary spirits.

BTS came up with their self-directed album, BE, which they said was about “being” during these trying times. The album’s first track, Life Goes On, is as poignant as it is optimistic. One verse translated to English says: “Though the world has stopped, don’t hide in the dark for the light will rise again.”

BTS continued to be productive, making meaningful music, performing, talking to fans online, distracting ARMY from the misery brought by the pandemic. I kid you not: fans have been on their toes for whatever content BTS would drop. Our phones have notifications for their VLives, a South Korean video streaming service. When our phones ping for a VLive, we know we’ll be in for an instant serotonin boost. BTS are effortlessly funny. This, we want to leave the general public to discover for themselves. It’s better seen than read about. Just thinking about BTS’ VLives as I write this with little sleep is already making me smile.

Many Filipinos, including not a few ARMY, scoff at the fact that a Filipino telecom dared to ask for an endorsement from BTS, superstar digital natives from the country with the fastest internet speed in the world.

Of course, I agree that the Philippines could do better when it comes to our internet infrastructure. Let’s not forget that this is the responsibility of both government and the private sector. But that’s a story for another day.

I’d like to think of the endorsement this way: by having the world’s most popular band as brand ambassadors, Smart will level up its game.

In September last year, Smart rolled out its 5G sites nationwide that include key cities in Visayas and Mindanao. It promised “superfast data speeds and ultra-low latency”. PLDT Chief Revenue Officer and Smart President and CEO Alfredo Panlilio was quoted as saying: “Our initial Smart 5G rollout lays the foundation of our vision to turn the Philippines into a Smart 5G country that is at par with the world’s technologically-advanced nations.” (I found all these on Smart’s website.)

I’m subscribed to both Smart and Globe. I have yet to experience 5G as I haven’t upgraded my SIM cards yet (though my phones, one of them a Samsung S20 BTS special edition, are 5G ready) but it’s been a while since I cursed my connection. Overall, I’d say that they’ve helped me stay connected with the important people in my world in this social distancing phase of our lives. This kept me sane.

Filo ARMYs are also called PH Pearls, inspired by “Pearl of the Orient Seas”. We are undoubtedly dedicated fans of Bangtan. The Philippines is consistently among the first countries to propel BTS songs to number 1 on iTunes, and keep them there. Spotify announced that BTS was the most streamed K-pop act in the Philippines and globally, of course, in 2020.

There’s a BTS-themed café in Quezon City which I hope to visit as soon as the pandemic is over. ARMYs made sure that the cup sleeve events, usually held in coffee bars and snack bars to celebrate the boys’ birthdays, continued by organizing them online. We ordered, the shops delivered to our homes which we decorate with buntings, balloons, and the boys’ photos. We prepare the members’ favorite foods, or a Korean meal, for their birthdays. Really, ARMYs the world over do that.

Following the Map of the Soul ON:E online concert in October last year, I joined the BTS community group on Facebook, “Borahae from Manila”, which to date, has nearly 350 members. I spend more time there than in my own Facebook page. It’s just a lot of fun talking about BTS with your fellow ARMY.

Being forced to stay at home by circumstances beyond our control has become more bearable because of RM, Jin, Suga, j-hope, Jimin, V, and Jung Kook.

The PH Pearls are shining with Smart’s good news. We can’t wait what BTSxSmart has in store for us for their ““Live Smarter, Live with Purpose” campaign.