With his second novel and collection of essays,
the late author holds up a mirror to the Filipino’s identity 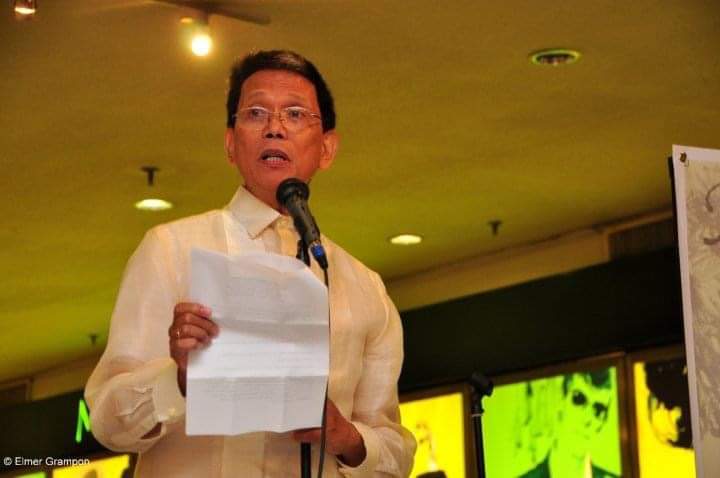 Memorial edition of the last three books of Dr. Mario Miclat (shown in file photo of book launch) will be launched Sept. 12, 2021 via Zoom. (Photo from Alma Miclat)

I don’t quite remember now when my husband, writer and academic Mario Ignacio Miclat, started his second novel which, at the onset, he already titled 21 West 4th Street. I believe that the seed of the story began to germinate after he read his mother’s diary, which she painstakingly wrote after her stroke until she passed away in the United States in 1984.

Mario was then in exile in China, and his application for a passport at the Philippine Embassy in Beijing was denied by the Manila Foreign Affairs office. He was unable to be with his mother, who was brought home to be buried. It would take two more years, until the Edsa People Power Revolution, before he could visit her grave in Olongapo City.

The gestation period for Mario’s last literary baby, however, took decades. The writing of his first novel, Secrets of the Eighteen Mansions, as well as his academic pursuits—post-graduate studies, teaching and administrative duties—at the University of the Philippines took precedence. His retirement in 2011 could have afforded him time to finally write and finish it, but more challenges came with a heart attack and stroke, one after the other.

Still, he plodded on, even with the constant internal struggles he had to contend with. Mario once wrote: “This is my confession of faith. I am a writer. I continue to write. Yet every time I feel the urge coming, I feel terribly afraid. I do not want it to come. But it comes. I sit in front of the computer, look into my heart, and write.”

This last opus by Mario, a novel loosely based on true events juxtaposed with colorful images of his fertile imagination that mingle spirits, ghosts, and myths past, was completed during the pandemic before he succumbed to COVID-19 pneumonia, exacerbated by COVID-19 myocarditis and fatal arrhythmia.

Indeed, the pandemic brought untold sufferings and death and curtailed the movement of people, especially the children, the elderly, and those with co-morbidities. Stuck with a routine of early morning walking and exercising at the rooftop of our condo and being cooped up at home, Mario did not only finish his second novel, but also was able to complete the compilation of his essays and poetry in English and Filipino.

The book of essays, Hundred Flowers, Hundred Philosophies, is divided into three: Personal, China, and Being Filipino, Filipino Being. These were what he last wrote in his notebook. It was like a clarion call to bring this anthology into public domain for all to appreciate.

The title was a take on the movement of “let a hundred flowers bloom and a hundred schools of thought contend,” which Mao Zedong undertook in 1956 to supposedly lift the restrictions imposed upon Chinese intellectuals and thus grant greater freedom of thought and speech. Mao alluded to the hundred schools of thought which flourished during the Spring and Autumn period and the Warring States period from 770 to 221 BC. It was touted as an era of great cultural and intellectual expansion in China.

But Mao’s movement did not last long. Civil society started criticizing communist policies openly in the spring of 1957, and the party was subjected to ever-increasing criticism. An anti-rightists’ campaign targeting the critics of the regime was unleashed in July that year. Most of the protesters lost their jobs and were forced to do manual labor in the countryside. Some were sent to prison. This scenario would happen again and in a more brutal and encompassing way during the Cultural Revolution which started in 1966 and lasted 10 years. 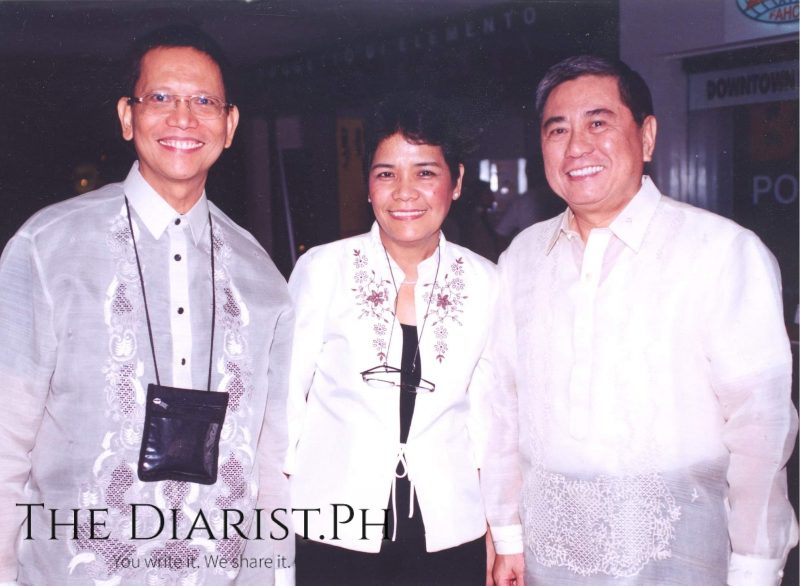 Mario’s life itself would be a life-long struggle, as could be gleaned in this narrative from one of his essays entitled Coping: “In such anticipation, every second grows so much longer, engulfing the whole of my life in all its fifty years or so. I am back to escaping air raids at the foot of the Caraballos; conducting a Marxist school and running a Maoist press in Central Luzon; climbing guerrilla camps in the Sierra Madre; hiding underground publishing networks in Baguio, San Miguel, Parañaque, and Quezon City; living an elite life in Beijing mansions; laboring like a slave in Hunan; being put under house arrest by Philippine communists for condemning the Plaza Miranda bombing and the Karagatan/Doña Andrea projects; beaming shortwave broadcasts in Filipino; writing poetry, stories, and essays; teaching, lecturing, doing research; building a family to be proud of. The messages remain mixed. My life is reduced to a trifle, to insignificance.”

‘There are struggles and struggles throughout history…’

It is significant that the thread running through the book is the search for truth, for nation’s identity, for being Filipino and the Filipino being. Mario wrote: “There are struggles and struggles throughout history—national, ethnic, gender, scientific, intellectual, moral, spiritual, religious …”

He added: “I believe, however, that our country’s history…has always been a history of individual dreams merging into something greater—a history of nation-building, economic pursuits, pride of place, and trying to grasp life’s meaning.” 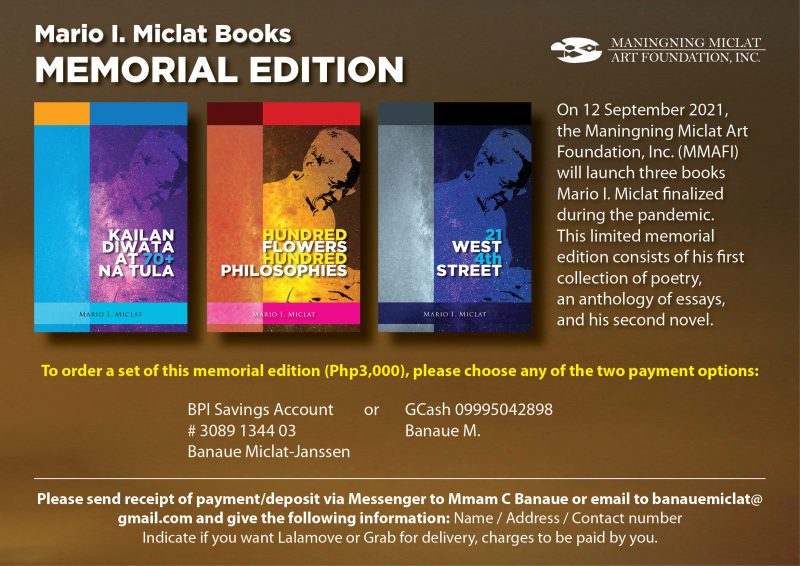 He concludes: “Taglay ng libro ni Mario ang lahat ng kaniyang siphayo, pighati, at dusa kalakip ng kaniyang masayáhin at magandang kalooban hanggang kamatayan. Kapag binása mo ang kaniyang libro ng tula, manghihinayang ka na may búhay na tulad niya at napakarami  nating hindi nakabása sa kaniyang libro noong buháy pa siyá.” (Mario’s book carries all his frustration, grief, and suffering suffused with his humor and good heart till his last breath. When you read his book of poetry, you’ll feel sorry that there’s one life like his and many of us were not able to read his book while he was still alive. – my translation)

A memorial edition of the three books, published by the Maningning Miclat Art Foundation, Inc. (MMAFI) with the support and assistance of the Filipinas Institute of Translation (FIT) and the University of the Philippines Diliman Chancellor’s Office, will be launched by Zoom on the author’s 72nd birthday on September 12, back-to-back with the 2021 Maningning Miclat Poetry Awards. You can now order the limited edition of only 300 sets of hardbound books from MMAFI, which is the beneficiary of the project. Visit Maningning Miclat Facebook page or email [email protected].

My Tanay interlude: A respite from grief

How to mend a broken heart

Soul searching at 70, long after grief and loss

She is a freelance writer and president of the MMAFI which is holding the 2021 Maningning Miclat Poetry Awards. She is the author of deluxe books Soul Searchers and Dreamers: Artists’ Profiles and Soul Searchers and Dreamers, Volume II, and co-author with Mario I. Miclat, Maningning Miclat and Banaue Miclat of Beyond the Great Wall: A Family Journal, a National Book Awardee for biography in 2007.