The loneliness of a locked-down loner

She had just broken up with her boyfriend. Now she was all alone
in her unit—no insects even, thanks to pest control 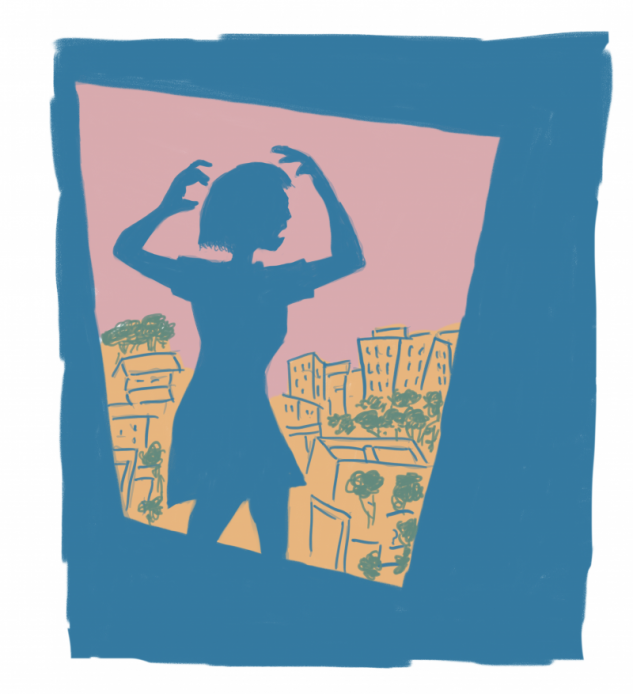 Dorine Makaputik, in her late 30s, still slim and good-looking, lucky enough to be flat-chested so her boobs never sagged, read the text alert with dismay. “One month lockdown. No going out except for essentials, and your allowed days are only Tuesdays and Saturday. When going out, wear face mask, face shield, bring Pasig Pass, athletic supporter and Halls Mentho-Lyptus. Curfew is from 6 pm to 5 am, whichever comes first.”

She had just broken up with her live-in boyfriend, and now she was all alone in her 28th floor condo unit: no love of her life, no relatives, no helpers, no puppies, no kittens, and thanks to recent pest control, no insects.

Dorine: “I can do this! One month isn’t so long. And my ex-boyfriend doesn’t know I have his Netflix password.”

She trudged to her fridge and checked if she had enough food for a month: ketchup, mustard, baking soda (to capture odor). That was it. She looked at her Apple Watch and saw that it was Tuesday, 3:45 pm. She’d be allowed to the grocery, just barely. She got the first dress on top of her laundry basket and put it on over what she was wearing. She slipped on her classic blue Birkenstocks and rushed out to the condo elevator. The elevator opened but there were already four people inside. “Damn these elevator social distancing protocols,” Dorine said under her breath. She waved the riders on, trying to project smiling eyes through her face shield, pretending that she had all the time in the world. The second the doors closed she immediately pressed the down button. The door opened again and Dorine shrieked. Leaping away, she broke the world record for the long jump.

The elevator opened but there were already four people inside. ‘Damn these elevator social distancing protocols,’ she said under her breath

After 15 minutes, she finally got to Basement 1. She rushed to her tiny Toyota Wigo and zoomed out. On the way to the Unimart, her car started lurching forward at high speed! She thought she was experiencing SUD—Sudden Unintended Acceleration. She already thought of the lawsuit and insurance money she’d earn, what places she’d travel to. She always wanted to visit Paris, maybe the Swiss Alps, go to Korea to catch a BTS Concert, buy an Hermès Birkin bag…then she noticed what caused the acceleration: her wooden Birkenstock sandal had gotten loose and was pressing on the gas pedal. She reached down and got it off, and her car slowed down just in time.

She arrived at the parking area and dashed to the supermarket. OMG! There were dozens of people lined up. The line snaked three times around the building under the heat of the sun.

She glanced at the people lined up. They all looked like they were going to church: they were dressed in Lacoste, Armani, Bally shoes, Louis Vuitton bags, signature face shields. Dorine did a double-take.

Finally she got the courage to ask a guy in the line in front of her, “Excuse me, is this the line to Unimart?”

Guy: “Ah, no. This is the line for the Pfizer vaccine.”

Dorine immediately ran off and searched for the right line for the supermarket.

By the time she reached the entrance, it was already 5:15 pm, she only had enough time to buy the maximum of three cup noodles, three cans of tuna, three cans of Spam, five boxes of Curly Tops, and a case of Coke No Sugar (Zero is now = 0).

Safely back at home just two minutes before the curfew, she panted as she put the groceries away. Then she went to her bedroom and slumped with a thud on her bed. Then she noticed a brown smudge on the bed cover. She looked at her dress. “Oh no!” she screamed. She had worn her work dress to the supermarket! The one she wore when she had to dye her hair natural brown, or clean the toilet, or cook food that splattered oil. And to think she saw at the supermarket one of her ex-boyfriend’s ex-girlfriends, the one she stole him from! All the while Dorine thought she looked cool and sophisticated.

Dorine: “What the eych!?! And this is just the first day of the lockdown! I’ll never get through the next 29 days!”

She went back down to her car, drove out, and parked near a hospital, where she saw they had tents outside for COVID-19 patients. It was night, and they didn’t see her sneak through one of the flaps on the tent and crawl her way to a cot where a patient was wheezing and coughing. Dorine put her face right in front of the sneezing and spitting patient, and took a deep, open-mouthed breath. Then she quickly sneaked back out, to her car, and dashed home to her condo. She put on her face mask and shield and wore gloves so she wouldn’t infect anyone in her building. As she got to her unit, she started feeling awful. She was feeling hot and feverish. “This is it,” she thought, “I’m about to kick the bucket.”

She barely made it to her bed ,and lay down. She opened her cabinet and with blurry eyes, tried to look for her bottle of sleeping pills, took a couple, and took a swig from her water bottle. Then she dropped her head on her pillow and closed her eyes.

The next morning, she was still alive! She opened her eyes, and it was around 11 am. She slept for over 10 hours! She took a deep breath. Her lungs were clear. She didn’t feel any aches nor pains. From her cabinet, she got her digital temperature reader: 35.5! No fever.

Then she looked at the bottle of pills she had taken last night, thinking they were her sleeping meds.

Writer, illustrator, programmer, lover, friend. These words have very little to do with the author but they sound nice and so have been included upon the author’s request. His Latin motto in life is—"Recedere pecuniam in ante diem" (Withdraw money before going on a date). He believes life is too short not to have fun while trying to be a decent person, so he applies everything he learned from Sesame Street.